Every which way but dead »

Every which way but dead 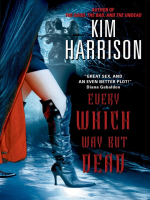 Description
There's no witch in Cincinnati tougher, sexier, or more screwed up than bounty hunter Rachel Morgan, who's already put her love life and her soul in dire jeopardy through her determined efforts to bring criminal night creatures to justice. Between "runs," she had her hands full fending off the attentions of her blood-drinking partner, keeping a deadly secret from her backup, and resisting a hot new vamp suitor. Rachel must also take a astand in the war that's raging in the city's underworld, since she helped put away its former vampire kingpin--and made a deal with a powerful demon to do so that could cost her an eternity of pain, torment, and degradation. And now her dark "master" is coming to collect his due.
Also in This Series