Not that kind of girl »

Not that kind of girl: a young woman tells you what she's "learned" 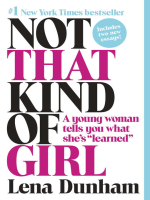 Description
"If I could take what I've learned and make one menial job easier for you, or prevent you from having the kind of sex where you feel you must keep your sneakers on in case you want to run away during the act, then every misstep of mine was worthwhile. I'm already predicting my future shame at thinking I had anything to offer you, but also my future glory in having stopped you from trying an expensive juice cleanse or thinking that it was your fault when the person you are dating suddenly backs away, intimidated by the clarity of your personal mission here on earth. No, I am not a sexpert, a psychologist or a dietician. I am not a mother of three or the owner of a successful hosiery franchise. But I am a girl with a keen interest in having it all, and what follows are hopeful dispatches from the frontlines of that struggle"--Provided by publisher.
Also in This Series

From the Book - First Edition

Love & sex. Take my virginity (no, really, take it) ; Platonic bed sharing : a great idea (for people who hate themselves) ; 18 unlikely things I've said flirtatiously ; Igor, or, My Internet boyfriend died and so can yours ; Sharing concerns : my worst email ever, with footnotes ; Girls & jerks ; Barry ; Falling in love
Body. "Diet" is a four-letter word : how to remain 10 lbs. overweight eating only health food ; Sex scenes, nude scenes, and publicly sharing your body ; 15 things I've learned from my mother; What's in my bag? ; Who moved my uterus?
Friendship. Girl crush : that time I was almost a lesbian, then vomited ; The best part ; 13 things I've learned are not okay to say to friends ; Grace ; 10 reason I <3 NY
Work. This is supposed to be fun? : making the most of your education ; Little leather gloves : the joy of wasting time ; 17 things I learned from my father ; Emails I would send if I were one ounce crazier/angrier/braver ; I didn't fuck them, but they yelled at me
Big picture. Therapy & me ; Is this even real? : thoughts on death & dying ; My top 10 health concerns ; Hello Mother, hello Father : greetings from Fernwood Cove Camp for Girls ; My regrets ; Guide to running away.
Excerpt
Loading Excerpt...
Author Notes
Loading Author Notes...
Subjects
Subjects
Actors
Actors -- United States -- Biography
Biography & Autobiography
Dunham, Lena
Dunham, Lena, -- 1986-
Humor (Nonfiction)
Nonfiction
Performing Arts
Television producers and directors
Television producers and directors -- United States -- Biography
More Details
ISBN:
9780812994995
9780812995008
9780804127349
Similar Series From NoveList
Similar Titles From NoveList
Similar Authors From NoveList
Librarian Reviews
Published Reviews
Reviews from GoodReads
Loading GoodReads Reviews.
Staff View