The secrets of people who... »

The secrets of people who never get sick 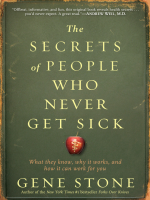 Written by Gene Stone, a bestselling health-savvy journalist who's investigated, firsthand, virtually every form of regimen, diagnostic test, therapy, and fad, The Secrets of People Who Never Get Sick, a fascinating and original book of science, tells the stories of 25 people who each possess a different secret of excellent health—and shows how we can all use these insights to change our lives for the better.

Meet Bill Thompson, an entrepreneur in his early sixties who has the EKG of a 20-year-old and hasn't had a cold in over two decades Bill's secret? Every morning he dunks his head in a basin of warm water and hydrogen peroxide, a powerful natural germ killer that has the added benefit of making Bill feel as invigorated as a teenager when he comes up for air. Meet Dr Robert Fulford, whom Andrew Weil considered one of the world's greatest healers, and who, even into his nineties, continued to see patients and was healthier than most people half his age. His secret: a daily set of stretching exercises that he claims stimulate the body's life force, a force too easily blunted by illness, trauma, and even bad breathing habits. Meet Barbara Pritzkat, a now 83-year-old archaeologist with incredible stamina and health, who attributes her well-being to a morning tonic of brewer's yeast—a treasure trove of B vitamins that's also protein-rich and a good source of selenium, copper, iron, zinc, and other minerals.

The stories make it personal; then comes the science, the authority (with experts' conflicting opinions on if and how it really works), and the nuts and bolts—how to bring each secret into your own life. From probiotics to veganism to a daily dose of garlic, from yoga to cold showers, it's an invaluable list: 25 secrets to health, and how to make each work for you.