The Roosevelts: an intimate history 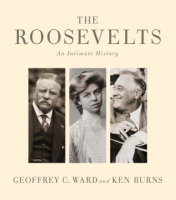 Description
New York Times Bestseller A vivid and personal portrait of America's greatest political family and its enormous impact on our nation, which expands on the hugely acclaimed seven-part PBS documentary series, bringing readers even deeper into these extraordinary leaders' lives With 796 photographs, some never before seen The authors of the acclaimed and best-selling The Civil War, Jazz, The War, and Baseball present an intimate history of three extraordinary individuals from the same extraordinary family--Theodore, Eleanor, and Franklin Delano Roosevelt. Geoffrey C. Ward, distilling more than thirty years of thinking and writing about the Roosevelts, and the acclaimed filmmaker Ken Burns help us understand for the first time that, despite the fierce partisanship of their eras, the Roosevelts were far more united than divided. All the history the Roosevelts made is here, but this is primarily an intimate account, the story of three people who overcame obstacles that would have undone less forceful personalities. Theodore Roosevelt would push past childhood frailty, outpace depression, survive terrible grief--and transform the office of the presidency. Eleanor Roosevelt, orphaned and alone as a child, would endure her husband's betrayal, battle her own self-doubts, and remake herself into the most consequential first lady in American history--and the most admired woman on earth. And Franklin Roosevelt, born to privilege and so pampered that most of his youthful contemporaries dismissed him as a charming lightweight, would summon the strength to lead the nation through the two greatest crises since the Civil War, though he could not take a single step unaided. The three were towering personalities, but The Roosevelts shows that they were also flawed human beings who confronted in their personal lives issues familiar to all of us: anger and the need for forgiveness, courage and cowardice, confidence and self-doubt, loyalty to family and the need to be true to oneself. This is the story of the Roosevelts--no other American family ever touched so many lives.From the Hardcover edition.
Also in This Series

From the Book - First edition.