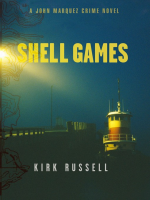 The discovery of thousands of empty abalone shells and two murdered divers sends Lieutenant John Marquez's poaching investigation in a newand very riskydirection. Former DEA agent and now head of a special operations unit of the California Department of Fish and Game, Marquez learns he himself has been targeted as the next victim. Stalking him is Kline, a vicious drug smuggler turned abalone poacher who has a vendetta against Marquez. John Marquez is supposed to protect wildlife, not solve murders, but the only way he can break the multi-million-dollar abalone-smuggling ring, as well as save his own life, is to find and stop Kline. A fast-paced crime novel set along the majestic Northern California coastline, Shell Games introduces a tough, complex, and appealing hero and a masterful new series.