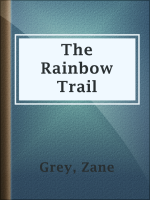 Description
The Rainbow Trail is Zane Grey's sequel to his 1912 classic, Riders of the Purple Sage. The definitive western ended with the rolling down of a huge rock by Lassiter to seal up himself, Jane Withersteen, and the little Fay Larkin in the "Surprise Valley", away from the pursuing Mormons. Years later, John Shefford, a disillusioned minister who was kicked out of his church, got a new job delivering goods to a village of almost 50 women--a "sealed-wife" village. He became friends with Venters who told him the story of Lassiter, Jane, and Fay. Shefford became intrigued with the tale and decided to find the "Surprise Valley." In his travels, he heard another chilling story that the Mormons had found a way into the Valley and carried young Fay away forcefully. He had to either organize a rescue or forget getting his beloved Larkin forever. In a bid to save the girl, Shefford embarked on a series of journeys full of hardship, treachery, narrow escapes, and mixed joy. If you're a fan of Zane Grey, don't miss this exciting adventure story.
Also in This Series